Dilihat: kali
Understanding Biology – When first studying biology in school, teachers often ask first “Tell me, what the understanding of biology?”. Sometimes there is the origin of us replied, “biology is the study of living organisms, or living things”. Yes, it is also true. Then, understanding the biology more clearly and detail what it is. Therefore, you as an aspiring scientist would have to know, so please refer to the explanations understanding of biology according to the biologists below.

Prior continued, my congratulations to you, whether new entrants have been accepted in junior high school or high school. Both junior and senior high school you will meet with biological materials. Please review the biological material with a happy, with a new way of linking what you learn about the environment, because “nature is always changing, unique, phenomenal, and also saved a lot of mystery” that will enrich your knowledge of science. 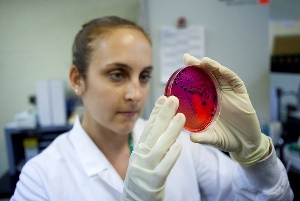 The word biology is derived from the Greek bios meaning life and logos meaning science. So biology is the study of living things and vital processes that include physical and chemical aspects.

According to experts, biological terms originally introduced in Germany in 1800 and popularized by the French naturalist Jean-Baptiste de Lamarck to describe a group of emerging science who all studied forms of life. This opinion is supported by a British zoologist Thomas Henry Huxley argued that all forms of life should not be studied in isolation, but must be within the disciplines of biology.

Biology is a collection of knowledge which was born and developed as the human response to symptoms, incident, and problem nature such diversity of living things, food, health, disease, environmental degradation, and so on. Biology became part of the IPA (Natural Sciences / science) that continuously evolve.

The development of the Biological Sciences Since BCE (BCE)

Biology evolved because human curiosity in responding to natural phenomena. Biology is the science of the oldest on earth. You certainly understand that the first man must have a good knowledge about the animals and plants in the vicinity. They must understand what plants are edible and which are poisonous, what is safe hunted animals and wild animals.

Hints historical development of biology can be obtained from Assyria and Babylon (3500 BC). Of drawings and remnants of history, it is known that the population of Assyria and Babylonia had fished and know medicine. They have learned a palm plant reproduction and showed that the pollen comes from male plants are used to pollinate the female plant. They also began to study anatomy for medicinal purposes.

The Egyptians started practicing biology and medicine since 2000 BC. You will recall their habits preserve corpses (mummies) with a kind of balm herb made from herbs. How can they do it without a good knowledge about the plant.

The ancient Chinese nation has known various medicinal plants since 2800 years BC. In addition to cultivated silkworms to produce silk fabric, they also have to know different kinds of insects, including breeding and ways of combating insects.

The ruins at Mohenjodaro shows that since 2500 BC residents have known agriculture to meet the needs of food and clothing. They cultivate wheat, barlei, cotton, vegetables, melons, and other fruits. A document found on the historical heritage sites show that they have made use of about 960 species of plants for treatment. The document also contains a variety of information about the anatomy, physiology, pathology, and surgery.

Aristotle, who lived in the middle of the 4th century BC to give consideration to the various sciences including biology. Aristotle introduces the basics of taxonomy that is still used today. He classifies animals into blooded animals and animals do not bleed. Blooded animals include groups of mammals, birds, amphibians, reptiles, and fish. Bloodless animals were divided into groups of cephalopods, crustaceans, insects, and Testacea consisting of small animals. Other research shows that animals have lungs to breathe air, are warm-blooded (body temperature remains despite ambient temperature changes), and produce offspring. Aristotle findings are important is knowledge of reproduction and heredity, including abiogenesis theory which states that the origin of life originated from inanimate matter or spontaneous generation believed just by the Greeks at that time. Aristotle also believes that all living things have a structure and functions that are tailored to the behavior and habitat. In the classification of animals she suggested to use an external structure as the basis for grouping and shows the importance of structural homology and analogy organs of animals that became the basis of the development of the science of comparative anatomy.

In the Arab region, biology boomed thanks to the experts contribute ideas as Al Jahiz wrote his knowledge of the animals and Avicenna widely credited with developing medical science, medicine, and treatment. In the 12th century the knowledge of botany and plant merged into inseparable from knowledge of studying animals, hunting, and surgery (called zoology). The subsequent biological developments in various nations and gave birth to figures such as Leonardo da Vinci, Otto Brunfels, Leonhard Fuchs, Pierre Belon, and so on.

When the microscope invented by Leeuwenhoek in the 17th century, began the study of biology with the object, namely microscopic cells and microorganisms. Since then developmental biology made progress, demonstrated by the development of theories of life and the emergence of new branches such as embryology new biology and microbiology. Figures who contributed to develop biology at the time was Roobert Hooke, Francisco Redi, Lazzaro Spallanzani, and Louis Pasteur.

Learn matter further: Biology As Science
Perseverance and tenacity experts have developed the modern science of biology into an advanced and extensive coverage. Developmental biology is inseparable from the development of other sciences such as chemistry and physics. When it was discovered that more sophisticated equipment such as electron microscopes and analytical methods are more sensitive to the 19th century, the study of biology is becoming increasingly widespread because the object began to be studied in molecular biology. Biology provides an important contribution to the welfare of human beings because of the biology underlying the development of applied sciences, such as agriculture, animal husbandry, medicine, healthcare, industrial, pharmaceutical, and so on.

Well, that’s a glimpse of the understanding of biology. You learn biological science course has benefits both for yourself and others, as has been described in the development of biological sciences. And the future is still waiting with a million hopes and secrets and mysteries of nature that needs to be studied and taken its benefits to mankind. May be useful.