Theory of Evolution in Biology and 10 Leaders originators Expert

Theory of Evolution, really is not it ??? Is evolutionary theories were proposed by the experts was true. In your opinion, is there any evidence and facts are clear and evident. Or is it just a theory and without scientific evidence

Until now the theory of evolution is still a controversial matter. Because many do not agree that humans are descendants of apes. But that’s not actually form the main topics discussed. Remember an intelligent person is one who not only criticize but the important thing is how the search for scientific truth.

There are several theories of evolution in biology, according to experts such as Darwin’s theory of evolution, Lamarck, by Harun Yahya. People who think rationally, scientist, and great curiosity would not only argue his theories only. His name is also the theory, everyone should theorize, everyone may change theory, and everyone should abolish the old theory. During that time no scientific evidence to support his theory.

Indeed, all living things come from previous living things that can come up with new variations that cause the diversity of living things. The existence of these variations can lead to new species. This event is known as evolution. Thus, evolution is a complex process of inheritance organism that changes from generation to generation over a period of millions of years.

The theory of evolution is a theory that is still warm contested to date. Many people who argue about this, but there is no one theory that can answer all the facts and events of history development of living things.

According to the Theory of Evolution 10 Experts

Some theories of the experts is the basis of the theory of evolution, including the following.

Aristotle is a philosopher who came from Greece, which sparked the theory of evolution. He said that evolution occurred by natural metaphysics, metaphysical meaning can change the nature of organisms and habi- tatnya from simple forms to more complex forms.

Anaximander also a philosopher of Greek origin. He argues that humans originated from aquatic creatures like fish and experience the process of evolution.

Empedoclas was a Greek philosopher. He put forward the theory that life originated from black mud that gets light from the sun and turn into living things. Evolution occurs with the start of the simple living beings evolved to be perfect and ultimately become as diverse as it is today.

Erasmus Darwin was the grandfather of Charles Robert Darwin, a British evolutionary character. The theory is that evolution occurs as a functional part of the stimulation is inherited. He compiled a book entitled Zoonamia against evolutionary theory of Lamarck.

Buffon found variations that occur because of the influence of natural surroundings, causing hoarding inherited variations.

Lyell was a scientist who came from Scotland with his famous book entitled Principles of Geology. In his book The Lyell argued that the earth’s surface is formed through a gradual process in the long term.

Jean Baptiste de Lamarck (1744 – 1829) biologist French nationality, has an idea and write it in his book entitled “Philoshopic”. In his book Lamarck said as follows.
Environment have an influence on the characteristics and traits inherited through the process of environmental adaptation.
Characteristics and properties that form will be passed on to offspring.
Organs are often used to grow and grow bigger, while the organ that is not used will undergo shortening or shrinking, even disappear.

Examples that can be used by Lamarck is a giraffe. According to Lamarck, the giraffe originally had short necks. Because the food in the form of leaves is high, then the giraffe trying to reach them. Because accustomed to it then the longer, the giraffe’s neck becomes longer and the next generation will be even longer.

Lamarck’s theory was opposed by Erasmus Darwin (grandfather of Charles Darwin) who said that the giraffe population is heterogeneous, there are short-necked and there is a long-necked. Giraffes are competing for food. Of the competition will win the long-necked giraffe and will remain alive, this trait will be passed on to offspring. Short-necked giraffes would die and slowly become extinct. To be more clear regarding the comparison of these two theories, can you consider Figure

Charles Robert Darwin (1809-1882) was a scientist sustainably British nationality who set sail on a tender 1831. By using HMS Beagel, he set sail heading to the Galapagos Islands, which is a remote island approximately 1050 km away from the mainland United States , In his voyage to arrive in the Galapagos Islands Charles Darwin discovered and observed a wide variety of finches that have a wide variety of beak shape. The morphological differences turned out to show their kinship with birds in the United States. findings by Darwin’s finches can be seen in Figure

In the 18th century economist Thomas Robert Malthus an Englishman (1766-1834) expressed the opinion in his book entitled An Essay on the Principle of Population. Malthus concluded that the number of rises as geometrically (1, 2, 4, 8, 16 …) while the available foodstuffs rose as arithmetically (1, 2, 3, 4, 5, …). From the theory it can be concluded that the amount of the increase in population faster than the increase in food production. This phenomenon resulted in living beings must struggle in order to survive. The properties that support will be maintained, while properties that do not support will disappear. Living creatures are able to survive and be able to adapt to its environment will escape natural selection.

Weismann argued that the body’s cells are not influenced by the environment in decline, but based on the principle of genetics. Weismann conducted an experiment to prove his theory. The treatment given to the two mice who cut his tail and then the mice were mated. The result is a generation of offspring is still a long tail to the generation of the 21st. From the experiments are then finally Weismann draw conclusions as follows.
Changes in body cells due to environmental influences are not inherited to the next generation.
Evolution is a matter of genetics, meaning that evolution is a symptom of natural selection to genetic factors 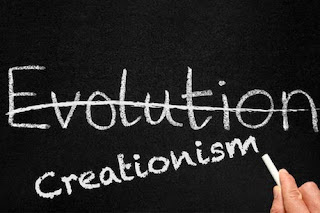 The theory of evolution by Harun Yahya is the antithesis of Charles Darwin’s theory of evolution. Darwin revealed that living things emerged in the world is without any coincidence that created it. Darwin also introduced that one species or organism can evolve into other creatures in the long term.

The rebuttal case, for example, forming a coincidence theory of evolution, it turns out if deeply observed many examples the design as intentional by design or by the Supreme Governing.

From a variety of scientific evidence found by scientists there was no indication that dragged that living beings are formed through a process of evolution in which the different living things do not appear to earth by way of evolving. Instead, by design of the design of God is real evidenced by the emergence of living species emerged simultaneously and together perfectly. For instance reptiles, from the beginning of the emergence of shape as reptiles that exist today, there is an evolution from its original form as it was not a reptile.

And there are many other arguments of which is expressed in the theory of evolution by Harun Yahya that turned out to be studied more in depth if it makes more sense and is recognized by many Western scientists though.

As selingannya, please watch the evolution of early humans in Indonesia. Remember, once again this is only a theory guys. Video The following is a summary of the material results of student majoring in history, which I make in the form of video to the thesis assignment.

Well, that’s some of the theory of evolution in biology initiated by the experts. Theory will remain a theory without implied in real life. And any theory, please take the good course, to add insight, inspiration, or even facts to get the truth better. May be useful. Just a distraction, perhaps to watch a video about the history of early man in the following Indonesie.