Home » biology » The beginning of Charles Darwin’s theory of evolution, before the Human Evolution

The beginning of Charles Darwin’s theory of evolution, before the Human Evolution

Charles Darwin is famous theory that reveals the Origins of Man. Emm .. agree or not, it’s free. His name is also the theory, yes not. Charles Robert Darwin was a scientist in the years 1809-1882 were ever put forward the theory of evolution on the origin of man, and claimed that early humans initially were apes that evolved into modern humans today.

It seems that new theories have also begun to emerge, so that shift and cause the collapse of Charles Darwin’s theory. The new theories include the theory of creation expressed by Harun Yahya. But any theory that is created by a scientist, must have been through the process and lengthy analysis, by collecting evidence to support his theory. And maybe, someday will be replaced by theories that later, it was reasonable.

Know that science is always evolving, also continues to advance human civilization, and the development of human-generated technology is also becoming more sophisticated. It is only logical if in today’s modern era, a theory that will be published must have experienced the process and stages of scientific research. To support his theory, the scientist must be able to address the evidence resulting from the research process.

But, forget it all. Basically we can not imagine. As well as films in theaters. If the fantasy and imagination of man is limited, maybe this time we will not watch movies that are cool with a variety of visual effects that make it like a real movie once.

The important thing is, please learn and absorb as much knowledge as much as possible. But do not forget to take the positive and apply them in the real world. So that people do not give a label of “ah, theory”. Okay, sob. Let’s continue. 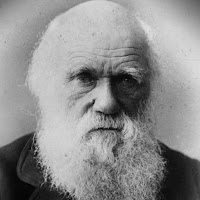 Theory of Evolution Darwin did not appear out of nowhere, but through a long process. Beginning his journey began with the aim to map the coast of South America that is still unclear.

While visiting the Galapagos Islands, Darwin discovered sepsis confusing. Generally the species found in the Galapagos are not found living elsewhere, though there are similarities with the animals in South America.

In his observations, Darwin discovered a wide variety of finches that have a wide variety of beak shape. Although these species is somewhat similar, but seen as a distinct species, and show kinship with finches in South America.

Based on the above image, finches major difference lies in the shape and size of their beaks, which are adaptations to certain foods.

Charles Darwin put forward his theory in his book The Origin of Species by Means of Natural Selection (the origin of the species which occur through natural selection), published on 24 November 1859.

The theory put forward by the things that have been observed as follows.

Why did it happen? Try to pay attention. Is there any factor of natural selection there.

The above theory is the beginning of the evolution theory of Charles Darwin. After completing his journey, Darwin also studied geology, especially of fossils. Most books are studied in depth Principles of Geology (the principles of Geology) by Charles Lyell.

In the book, Darwin concluded that:

Furthermore, please learn more and more about the theory of human evolution here »Theory of Evolution Darwin’s The Origin of Man

Those are some explanations and a brief review of the Theory of Evolution: Darwin and evolution of man. May be useful for anyone who read them, if there are less obvious and would like to ask please comment or ask via Contact. Thank you for visiting.