Mode Transmission of HIV AIDS & How to Avoid or Prevent

Dilihat: kali
Before discussing about the Modes of Transmission of HIV AIDS and How to Prevent or avoid so as not infected, there is one question you need to answer. You already know about HIV and AIDS itself? Well, sometimes there may still be some people who are confused and inverted or wrong with these terms. Therefore, let us first discuss about the notion of HIV AIDS, then what the symptoms of HIV AIDS, then we discuss how HIV-AIDS are true, and the last one we have to know how to avoid or prevent it from infected. 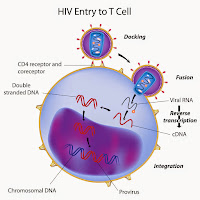 HIV (Human Immunodeficiency Virus) is the virus that causes AIDS. Whereas AIDS (Acquired Immune Deficiency Syndrome) is a disease, more detail is a disease that attacks the immune system.
HIV is a type of retrovirus that is rarely found in humans.

Retroviruses are RNA viruses that can make DNA via reverse transcription. Therefore, this virus is equipped with a specific enzyme reverse transcriptase. Developing HIV by attacking the T4 lymphocyte plays an important role in the body’s immunity.

During HIV infection, the lifetime of the person will be carrying the HIV virus. This is because the body’s defense system in the form of lomfosit T cells have been invaded by the virus itself, the body is not able to fight the virus. The HIV virus is found in blood, semen, vaginal fluid produced and other body fluids of people with AIDS.

By decreasing the immune system (immunity), then the people who have been infected with the HIV virus will get sick. Like the flu, which should be healed by itself (fast) and without drugs in ordinary people, but it will be a prolonged illness and a long recovery in people infected with HIV. Of course, because of the nature of the virus that can not be destroyed by regular medication. You may also know, the nature of the virus is able to crystallize themselves, if not already read more here »Characteristics Virus.

Mode of transmission of HIV AIDS

Well, because the HIV virus is very dangerous, so we do not get infected and infected with a virus that is yes. Therefore, recognize the way how HIV AIDS following correct.

And keep in mind is also yes, HIV-AIDS transmission can not occur through the following things.

How to Avoid or Prevent Transmission of HIV AIDS

3. Way through the mother
By calling for AIDS-infected mothers not to get pregnant.

Similarly, information about AIDS and HIV Transmission Ways to Avoid or Prevent. May be useful.