Level of Life Organization – material order of organization of life and this understanding will make us better understand and know the benefits of biology. We will also increasingly aware, not overbearing, and give thanks to God who has created us. Because the true man is a weak creature composed of cells, tissues, organs, and so on, all of which will not work when one section having problems (pain).

Other living beings are also given the completeness of organs that are not much different from us humans, there are hands, feet, eyes, ears, and other organs. But only a human being was given intellect of the most high over all other living creatures. Therefore, let’s raise our gratitude to study biology and familiar with the parts of our lives, from the smallest to the greatest extent. This is the level of Life Organization.

Before the continued discussion of this matter, do not forget also the branch of biology that has been described in the previous material, to always remember, then apply the understanding at the organizational level following the life of this because there are also related, in order to better understand and not just memorized. Remember, biology is not rote, but better implementation (applied).

Generally we have known only the smallest part of a living thing is a cell, padalah inside the cell there is still a component or constituent smaller again. Is that? The following explanation will further clarify your curiosity. 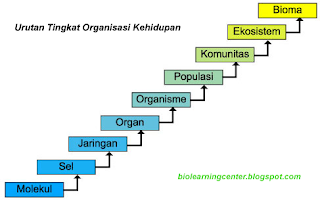 What’s the molecule? what is a network? and what it komunisat? Okay, let’s discuss one by one starting from the organization of life from the lowest to highest.

While studying chemistry, we might already know that the lowest level of the material are protons, neutrons, and electrons. Particles of protons, neutrons, and electrons combine to form atoms (eg hydrogen, carbon, nitrogen, and oxygen). The atoms then bind to form molecules, such as water molecules, glucose, proteins, and DNA. Yes, DNA is the molecule.

These molecules bind to each other and form a bond more complex organelles in the cell constituent. Therefore, it can be said that the molecules, atoms, and subatomic particles constitute the functional organization of the biochemical level (chemical compounds making up living beings).

Network found in multicellular organisms (multicellular). Network is a collection of cells that has the form (structure) and the same function. The cell group has a specific function. Here are examples of tissues in living organisms.

Animal tissue
Animal tissue composed of several types. The networks included the epithelial tissue, nerve tissue, muscle tissue, and blood tissue. Epithelial tissue composed of epithelial cells that are interconnected. Neural network consists of nerve cells that function to receive and respond to stimuli. Muscle tissue is a long fiber that has a function as a tool motion. The blood tissue composed of blood cells. These blood cells have different functions. There are circulating oxygen, nutrients, some are functioning as antibodies or immune system. More details on this matter, will be discussed in class XI.

Network on Plant
Like tissue in animals, tissues in plants (Figure 1.10b) also consists of various types. Contained in the plant tissue in between the epidermal tissue, vascular tissue, tissue reinforcement, and meristem tissue. Epidermal tissue is the tissue that coats plant surfaces. Vascular tissue consisting of xylem and phloem. Functioning xylem transports water and soil nutrients from the roots to the leaves, while the phloem transport of photo- synthesis function of leaves throughout the plant body. Network reinforcement in plants composed of cells that are thick and strong. This amplifier supports network functions plant body. The meristem tissue is active tissue divide to produce new cells. Further on the network on plant matter will be discussed in class XI.

Examples of other organ is the heart organ whose role is to pump blood; lungs to exchange oxygen and carbon dioxide; organ ears to hear; and organs of the eye to see. Organs in plants, for example leaves for gas exchange, interest for breeding, and the roots to absorb water and mineral salts.

The organs that perform the functions and duties referred to as a system of interrelated organs. For example, the respiratory system formed from the same working organ of the nose, pharynx, larynx, trachea, bronchi, and lungs to function respiration. The digestive system is made up of cooperation organ of the mouth, esophagus, stomach, intestines, liver, and pancreas. Digestive system function execute digestion and absorption of food juices. Motion system to support and move the body composed of the muscular and skeletal. You mentioned the example of other organ systems as well as the name of its constituent organs.

In organizational life ecosystem level, we can also see the flow of energy from photosynthetic organisms to herbivores and carnivores.

Greater extent as an object Biology studied are biomes. Biome is an area of ​​land that is fairly widespread in the earth is characterized by a dominant plant species. Examples desert biome, the biome grasslands, tropical rain forest biome, biomes tundra and taiga biome. The object level Biology greatest learned is the biosphere. What is the biosphere?

Well, after understanding one by one penjelasnnya, the following organizational level scheme of life more clearly in images from lowest to highest. 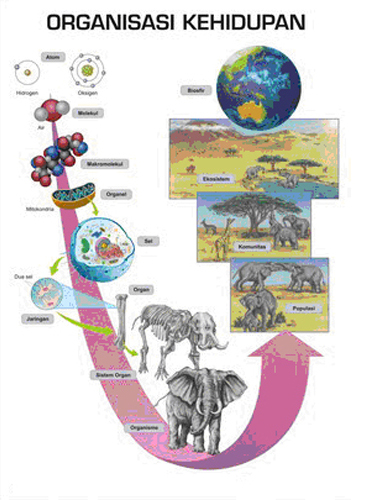 Well, it’s obvious yes. Part of our body that is the smallest to largest (komplesk). Similarly, our review of the level of organization of life and pengertinanya, hopefully quite clear and useful for anyone who read it.
Share on: Twitter Facebook Whatsapp Telegram
Level of Life Organization: Sequence, Structure, & Understanding FULL | admin | 4.5
TAGS: