Characteristic feature of seed plants. There are many types and examples of species of plants that are around buddy. In contrast to the moss and nails that may be rare. Therefore, man will be more to know and easy to learn this material.

If you frequently eat any fruit, the seeds are emm..pastinya know where. Inside the fruit is not it? Well, that’s an example of plants that have seeds enclosed. Have also noticed beans buddy, how many pieces? Well, that’s one example of the seed plants into pieces two. Then, what gymnosperm, for example, what?

Seed plants called Spermatophyta, derived from Greek, sperm means the beans and phyta means the plants. This is what makes the seed plants are plants with higher reproductive system. Unlike plants that previously learned that my friend and spike moss, where both species are still breeding with spores.

In my opinion, it is more perfect seed plants, why?

Try to understand more about the explanation pal characteristics of plants mosses and seeds. After the process of reproduction, male and female spores met, whether that will be formed? Yes, of course the forerunner of a new plant in the form of Prototype and there is also protalium. The drawback is that if the environment does not support the new individual candidates could have been dead.

Unlike the seed plants. After the reproduction process, will form the name of the seed. This is the forerunner of a new individual. However, the seeds will not grow until the environmental conditions favor. It means that the seeds can survive for a long time even years, and will grow if it find a safe environment to germinate and grow.

But if all seed plants seeds can grow to form buds? Well, try searching the reference pal. Okay, back to the material. 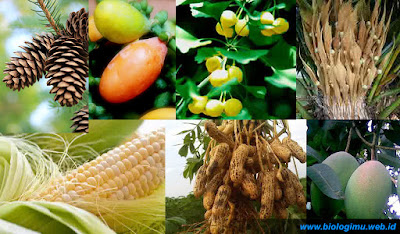 Basically seed plants have roots, stems, leaves, flowers also. In general, the characteristics of seed plants is as follows.

Seed plants (Spermatophyta) is currently around 250,000 species of its kind that has the type most widely than mosses and nails.

Based on the distribution of seed plants above classification, it can be seen several examples of seed plants that we encountered in the environment around us, including the following.

Seeds produced by seed plants produced from the process of pollination (pollen fall on white). After that there will be a process of fertilization (conception), this process will evolve so that the resulting embryos will eventually be formed drupe.

Well, until here the explanation about the material  Characteristics of seed plants. Do not forget also the previous material that discusses the ferns. If there is to be conveyed or ask please comment or via Contact. Hopefully useful and see you at the next material. Thank you for visiting.