Do not just study the examples, the benefits of, or material wealth of biodiversity in Indonesia. But the important thing is how to maintain and preserve biodiversity. Why is that? Because today many are proud of killing and slaughter of game animals that are rare and protected, then exhibited in social media. Are moral Indonesian people today have started badly like that? Hemm .. SEVERE. !!!

Unfortunately right, if wealth is not maintained and preserved and eventually extinct. Remember, in Indonesia today more and more environmental damage that causes loss of biodiversity and threaten the existence of flora and fauna are endangered. Even extinct also exist, an example of Java tiger. 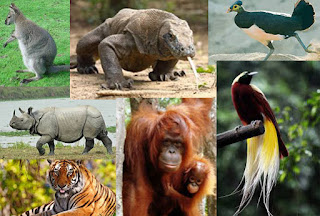 Biodiversity in Indonesia is very high. Evidently, most types of plant life on Earth can be found in Indonesia. There are about 38,000 species of plants, 3,000 species of moss, 4,000 kinds of nails, and 20,000 plant species seed (8% of the world) that have been investigated. Of the thousands of plant species, estimated that only 10% had been utilized by people as food, ornamental plants, medicines, building materials, industrial materials, and so on.

Indonesia also proved to have a wealth of diversity of animals and many of which are endemic. From the survey results IBSAP in 2003 it is known that in Indonesia there are 515 species of mammals (36% endemic, the first rank of the world), 35 species of primates (25% endemic), 511 species of reptiles, 1,531 species of birds (some endemic), 270 species of amphibians and 212 butterfly species (44% endemic). Examples include a tiger endemic to Java, Bali starling white in Bali, one-horned rhinos in Ujung Kulon (West Java), binturong, monkeys, tarsiers in North Sulawesi, lemurs and maleo only in Sulawesi, dragons on Komodo Island and its environs.

Based on the above factors, it can be concluded that the biodiversity of Indonesia is very high. This is because each geographic zone has a different character, many islands that stores endemic animals and plants, and a vast sea area with specific biodiversity. Can you imagine how diverse biological Indonesia?

The uniqueness Distribution of Biodiversity in Indonesia

Based on Wallace Line and Weber, there are three zones that divide the territory of Indonesia.

Zone Australia also called Australis or Australasia, covering the eastern region of Indonesia, Maluku and Papua. Diversity of flora in eastern Indonesia, there is a forest with trees are low and are in flat areas such as matoa and Ficus (family banyan).

zone is a region contained transitional biodiversity comes from the Oriental zone and zone Australis. This zone covers the central region of Indonesia, Sulawesi and Nusa Tenggara.

Understand and also apply Summary Biodiversity materials in Indonesia, in order to maintain its sustainability in order to continue to exist until our grandchildren Remember, that are already extinct then we and the next generation will never be seen anywhere in the world.